iSUBSCRiBE – Search all the latest Australian hobby magazines or  check some popular Australian and international magazines for model enthusiasts below. UGears Aviator Model
UGears Aviator Model. UGears. Become the flight navigator and the pilot of your dreams with this exceptional 3-in-1 flight set! The UGears Aviator Model is the very first mechanical flying machine in the Ugears transportation vehicles collection. Consisting of 3 modules (the flight control tower, airplane and helicopter) this model is ideal for beginners and experienced old-timers! from Coolthings.com.au 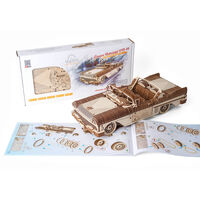 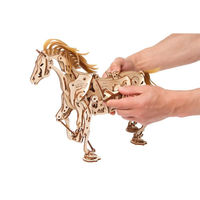 UGears Horse Mechanoid
UGears Horse Mechanoid. UGears. The Ugears Horse Mechanoid is, put simply, a wooden bionic horse that walks! Consisting of 410 laser-cut plywood pieces, your mechanical model takes around 8-9 hours to complete. On completion, you'll get to experience how the joints and leg movements closely resemble that of a real horse! This is thanks to the special design established by Ugears in order to achieve complete stability in motion. from Coolthings.com.au UGears Tram on Rails
UGears Tram on Rails. UGEARS. This cool UGears Tram on Rails was inspired by the earliest streetcars and funiculars and is probably the one of the most romantic model in our UGEARS catalog. In addition to displaying a great deal of retro flair, the Tram can actually travel on its included adjustable tracks. from Coolthings.com.au 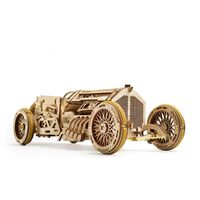 Airfix Model World (UK) Magazine 12 Month Subscription from iSubscribe
Airfix Model World magazine is your complete guide to the world of scale modelling. Published monthly, it caters for all manner of modellers, from the eager novice to the experienced master modeller. While new Airfix toolings and re-releases feature on a regular basis, the magazine also covers a…

British Railway Modelling (UK) Magazine 12 Month Subscription from iSubscribe
Each month with a subscription to British Railway Modelling readers can enjoy a varied content covering steam and diesel era modelling in all the popular scales and gauges. From diminutive N gauge and 2mm finescale models to the robust engineering of 5 gauge live steam, and almost everything in be…

Continental Modeller (UK) Magazine 12 Month Subscription from iSubscribe
Your passport to the best in International Railway Modelling.Regarded as essential reading for every enthusiast who models the different railways of the world. Each month a subscription to Continental Modeller magazine shows you how to reproduce foreign railway scenes perfectly and is filled with re…

Heavy Duty Magazine 12 Month Subscription from iSubscribe
HEAVY DUTY is Australia's favourite Harley-Davidson and V-Twin motorcycle magazine. It is a high quality publication that showcases motorcycles mainly from Australia, but also around the world. HEAVY DUTY features test rides on latest models and presents the best custom bike builders and their creat…

MiniWorld (UK) Magazine 12 Month Subscription from iSubscribe
Mini World magazine is dedicated to the car we all love- the Mini. A subscription comes with 13 issues per year delivered to your door.Each issue is packed full of the latest mini news, pages dedicated to vintage models, a huge mini classifieds section, test driving, latest show events and photos an…

Railway Modeller (UK) Magazine 12 Month Subscription from iSubscribe
Railway Modeller is the UK's No1 model railway magazine. Every month it features the best from the hobby for those modelling Britain's railways in all the popular scales and offers a unique blend of articles by experts and beginners alike, including a special section for newcomers wanting to learn a…

RCM&E (UK) Magazine 12 Month Subscription from iSubscribe
A subscription to RCM&E magazine is an essential purchase for any model aeroplane enthusiast.Radio Control Models and Electronics first appeared in May 1960 and has grown to become the UK's biggest and best selling monthly model flying magazine.RCM&E has brought benchmark levels of writing and photo…