Aerobatic Adventure Flight in a Genuine World War 2 Warbird Plane – Sydney This is the Real Deal! Step back in time and experience the thrill and exhilaration of high “g” aerobatics and combat manoeuvring in this genuine 1942 fighter pilot training aeroplane. (from Adrenaline)

Flying Lesson With Aerobatics, 45 Minutes – Camden Airport, Sydney Have you ever wanted to feel the thrill of flying a plane? Be a pilot for the day and take to the skies to learn the basics of flying and aerobatics with this Trial Introductory Flight. (from Adrenaline)

Ultimate Action 30 Minute Aerobatics Flight – Camden Sydney Ultimate Action… Its the best way to describe the thrill of a Pitts Special Aerobatic Flight! The significant advantage to the Pitts is that it is light and easy to manoeuvre in the air. (from Adrenaline) 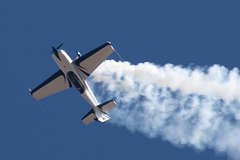 Extreme Aerobatics Experience in the Extra 330LX, Bankstown Aerodrome
Duration: 25 minutes
Get a taste of the Red Bull Air Race right here in Sydney and experience neck numbing aerobatics at their most extreme in the Red Baron Extra Aircraft Stunt Plane . From the same stable as the Extra 300, a featured aircraft in the Red Bull Air Race (Nicholas Ivanov won the Perth 2007 leg in his Extra 300SR), the Extra Aircraft Stunt Plane has a top speed of 410 km/h, a climb rate of 2000 feet per minute and a staggering roll rate of 360 degrees per second. It is rated to a neck numbing positive 8 G' and negative 8 G'! This flight is not for the faint hearted! Youll experience G forces of anywhere between +8G and -4G, alternatively being pushed into your seat or pulled hard against your harness. The large bubble canopy will give you unrivaled, uninterrupted views of the the surrounding landscape. 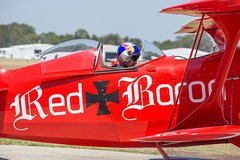 Intense Aerobatic Experience in the Open Canopy Red Baron Pitts Special, Sydney
Duration: 30 minutes
Once airborne youll head west towards the foothills of the Great Dividing Range. Over St Mary'- in the designated training area- youll climb to 3500ft-4000ft. Youll start with some basic manoeuvres- like loops, barrel rolls, wingovers and hammer head turns- to get the feel of things. Your pilot may also treat you to some inverted flight- flying upside down- and to a hesitation roll- a four-point roll where you pause and fly straight ahead at each quarter turn! Your pilot will explain each manoeuvre as you go through it. 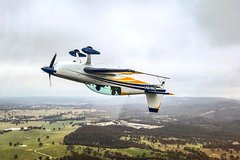 Intense Aerobatics Experience in the Extra 330LX, Bankstown Aerodrome
Duration: 18 minutes
Get your blood pumping by experiencing aerobatics in the Red Baron Extra Aircraft Stunt Plane. The Extra Aircraft Stunt Plane has a top speed of 410 km/h, a climb rate of 2000 feet per minute and a staggering roll rate of 360 degrees per second. Once youre comfortable with the basics ¬ñ the pilot will step it up by showing you a few of our intense combinations maneuvers. Youll experience a sequence of manoeuvres that will surely place you outside of your comfort zone. In addition the large bubble canopy will give you unrivaled, uninterrupted views of the the surrounding landscape. The Red Baron Extra Aircraft Stunt Plane is made of the latest in carbon fibre composite technology combined with a proven steel airframe construction. This allows the Extra to withstand the immense forces exerted upon it during flight while maintaining it' relatively light weight. 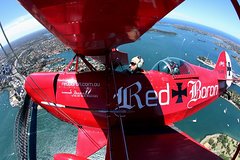 Sydney Harbour Joy Flight in the Pitts Special, Sydney
Duration: 50 minutes
You will take off from Bankstown Airport and climb over the outer suburbs of Sydney to reach a cruising altitude of 1500ft. Youll soar over the sprawling Olympic site at Homebush Bay then circle the north-western suburbs of Hornsby and St Ives. Once granted clearance to Sydney Harbour youll tour the city, taking in a bird' eye view of iconic landmarks like the Sydney Opera House and Harbour Bridge. You can wave at the Prime Minister at Kirribilli, fly higher than the eagles at Taronga Park Zoo and salute the sailors on Garden Island. It' the best seat in the house for the best view in the world! This is where you will have the option to experience some mild aerobatics; try a loop and a roll to give you a view of the world from a completely different perspective. This is what the Pitts is made for and your pilot will give you a taste of the G-Forces Baron Manfred Von Richthofen himself may have experienced during air combat. 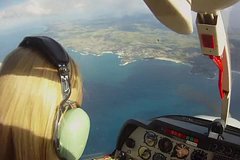 U-FLY Aerobatic and Sydney Scenic Experience, Bankstown Aerodrome
Duration: 1 hour
Experience the magic of pure three-dimensional aerobatic flight! Learn to turn, climb, descend loop and roll with the best views of Sydney under the guidance and safety of one of our highly-trained and qualified instructors. Taking off from Bankstown Airport you will head over the northern suburbs of Sydney, learning to climb, turn and descend. When you reach Palm Beach you will learn how to LOOP & ROLL over the northern beaches of beautiful Sydney! No prior flying experience is required! Depending upon the weather conditions, you may be able to fly the aircraft all the way from take-off to landing. On the way home, you have the opportunity to see what the Robin 2160i aerobatic trainer is really capable of, with your instructor demonstrating the aerobatic capability of the Robin with speeds up to 325km/h and G forces up to +6G'! 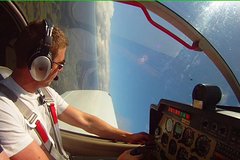 U-Fly Aerobatics Flight Experience, Bankstown Aerodrome
Duration: 45 minutes
Treat yourself to the ultimate aerobatic flight training experience in Sydney. During this 45-minute lesson, you'll learn how to loop and roll in an aerobatic training aircraft¬óthe Robin 2160i¬óduring a flight with a pilot-instructor over Sydney. After your orientation and safety briefing you will strap into the aircraft and taxi for takeoff. Shortly after take-off, your instructor will guide you through climbs, turns and dives on the way to the training area. Once you get to altitude, your instructor will then teach you how to LOOP and ROLL! No prior flying experience is required! You will learn everything on the day. On the way home, you will have the opportunity to see what the Robin 2160 aerobatic trainer is really capable of, with your instructor demonstrating the aerobatic capability of the aircraft with speeds up to 325km/h and G forces up to +6G'!. No previous flying experience is required.