June brings the beginning of winter and the shortest day of the year.

June Events in Brisbane and Queensland

Anyone can improvise! Ever wanted to try improv but you weren't sure if it was for you? This free 2 hour intro to improvisation course is designed for those who have never had any experience with...

Queensland Week celebrates the State's people and places. The week derived from the celebration of Queensland Day, held annually on 6 June to commemorate the day Queensland separated from the colony of New South Wales. Facebook:...

Check tickets for sale for theatre, sport, family attractions and more in Queensland from Ticketmaster or go direct to

Twilight Rock Climbing, 2 Hours – Kangaroo Point, Brisbane Challenge yourself with this outdoor rock climbing experience on the 20 metre high Kangaroo Point Cliffs. You'll scale the natural rock face at twilight on a Saturday evening and enjoy incredible views of Brisbane from the top. (from Adrenaline) 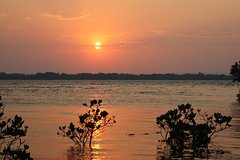 Full-Day Guided Tour with workshop: Karragarra and Macleay Island, Redland Bay
Duration: 7 hours 30 minutes
These jewels of Moreton Bay are known for their natural beauty, peaceful lifestyle and fascinating histories. They are also home to a vibrant arts community with many local artists drawing inspiration from their idyllic surroundings. My own love of nature, geography, history and the arts has been the inspiration behind Bay Island Tours; I want visitors to see the natural beauty of our islands, to meet with local artists and to get hands-on creating copper art memento at a home workshop. Special Offer – Intro offer: Book by June 18 to save 20%. – Book Now!